Solar energy is an exciting phenomenon that is not exactly old, but isn’t exactly new either. The industrial revolution bought on many changes in the world – some for better and others for worse, and climate change along with environmental degradation is one of them. Massive population growth has led to a huge urban boom and this urban overhaul is powered by city network grids that provide electricity sourced by conventional – aka non-renewable means. In an era where it is important to preserve our world, renewable energy has become a god send, and at the very top of that list is solar energy, which has become a popular trend over the past few decades. Solar energy works by converting sunlight into usable energy, and is professional referred to as Photovoltaics or PV. It uses silicon as a major component to conduct and create electricity that is distributed to the building envelop via a solar inverter. In this article, we would be discussing what a homeowner would need to know in order to install solar panels to their rooftop. 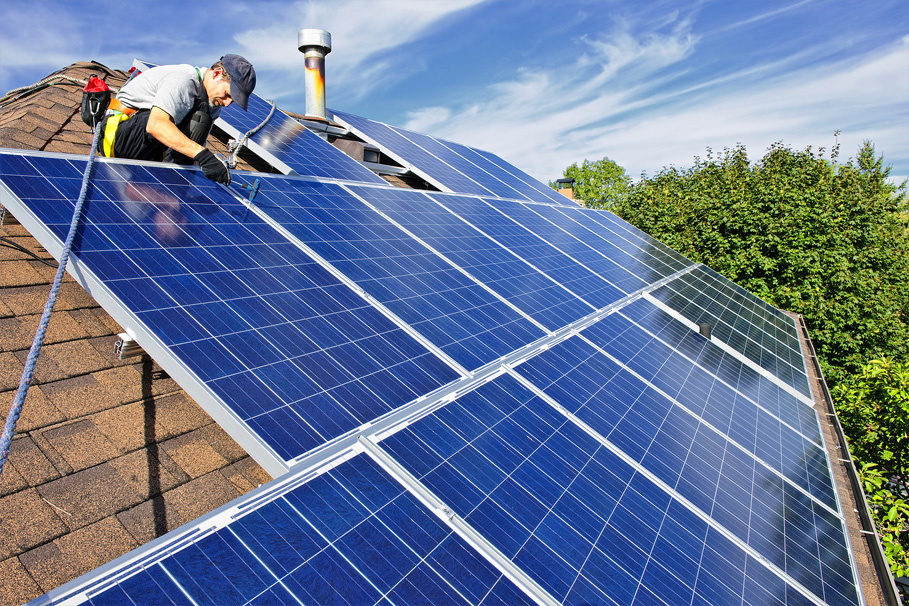 Take it to the Ground

The moment you decide to invest in a solar energy system, you should start taking into account all the mean monthly costs of your utilities – especially the electrical ones. It is a well-known fact that the higher the electric bills, the better resourcing and management the solar energy system can perform. The bill could guide you about how much energy you use on average, and take into account all the things that could lead up to an increase or decrease in that arena.

Another thing to take into account would be the orientation – solar panels are usually placed at an angle and altitude where the direct solar gain would be optimum. This would depend on the shape of your home – if you have inclined roofs in the direction of the optimum sun path, then all the better and if not – then there is no harm in using a flat surface. Just keep in mind that the more exposure to sunlight a panel can get, the better it would work – with an increased efficiency rate and storage capacity. Another thing to keep in mind would be obsolete shadowy spaces. Make note of all the spots that have inherent shades – be it a flourishing tree, the architectural composition of your home, or other pop out elements. The solar panel should not be put in such places, as it would be deliberate blocking of the sunlight and would result in a decreased efficiency rate.

It is important to note that the initial installation cost of any solar energy system, no matter what brand, is going to be on the steep end. There are, however many options to counterfeit that stipend. These options depend on your course of action; whether you want to buy the solar energy system or lease it. When you buy the system, you can always avail the tax credits, and when you lease the company is obligated to provide maintenance for the system until it is over.

All of this has to be compensated with an inclusion of potential upgrades that your home might need – this includes upgrades on circuitry and especially the roof. Make sure that your roof won’t need to be reinstalled in the next twenty years. If in the future, you would decide to sell the house the insurance premium would increase because the system is installed.

It would be prudent to hold a consultation with professional installers and ask for an estimate on the cost of installation, rebates, and savings. They would guide you to company loans, bank credits and such to help out with the initial installation cost. After that, the professionals will guide you to select the best solar panel option suitable for your needs. It would be prudent to meet with several professionals to get a better ‘majority’ view, and make sure they have a good track record or have experience installing for residential projects.

Since the solar industry has grown exponentially in the last decade, you can find many brand names that have made a big name in the solar industry. After you have selected the model, the professional would conduct a site survey and analysis. If all goes well, then a site surveyor would se sent to get proper measurements.

The number of panels you would need depend on a variety of factors:

Based on the size and average wattage of the panel, the professionals would do structural and electrical calculations. If all is well, then they would determine the number of panels – usually determined by covered area and efficiency of your brand – and provide a drawing that would mark the specifics of installations.

A professional installer would bring over a team, mount the frames, and have the panels installed, after which, they would be connected to the home circuit via a solar inverter.