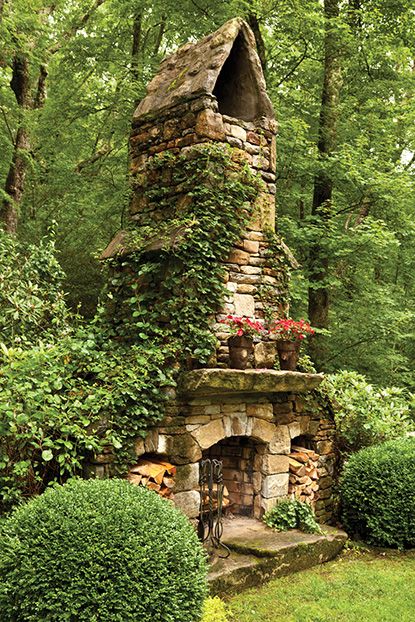 Fireplaces, in their origin, were most likely crafted from stone – cast layer by layer from carefully chosen pieces and held together by mortar, lasting ages and eons through willful exaggeration and the verity of their core product. Maybe that is why when most people think of fireplaces, the most frequently compared aesthetic that comes to mind is that of stone. Stone, in the past was not only a mode of construction, but it was also something that could be crafted into anything, and everything. Nowadays, it has been resorted to construction, and faced treatment. For fireplaces however, both of these options are still valid – you can have a fireplace that is totally constructed from stone, or one that only features a facade treatment of stone. Both of these options come in wide varieties, and the overall effect is rustic, welcoming, and distinctly cozy. So here, we’ll be taking a look at fifteen amazing rustic stone fireplace design ideas to get you inspired.

This stone clad fireplace features a dark facade that is further complemented by the brown shade of the wood. Just imagine a bright fire burning in the belly of this hearth, and the warm glow it would emit to keep your interior lit, and cozy. The shelving unit on top of the wall acts as a mantle, and adds a contemporary touch to the design while keeping the integrity of the vintage atmosphere intact. 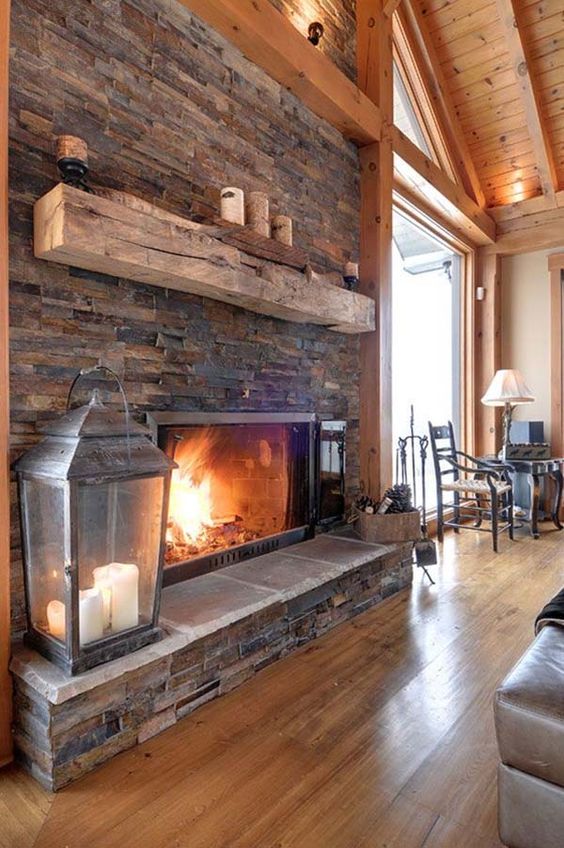 2. A little Something Different

Even though the white of this stone facade is in no way traditional, it definitely adds something more to the entire setting. The color treatment for the stone takes nothing away, but adds a frosty character that is not completely austere, but definitely welcome in the rough texture of the stone. 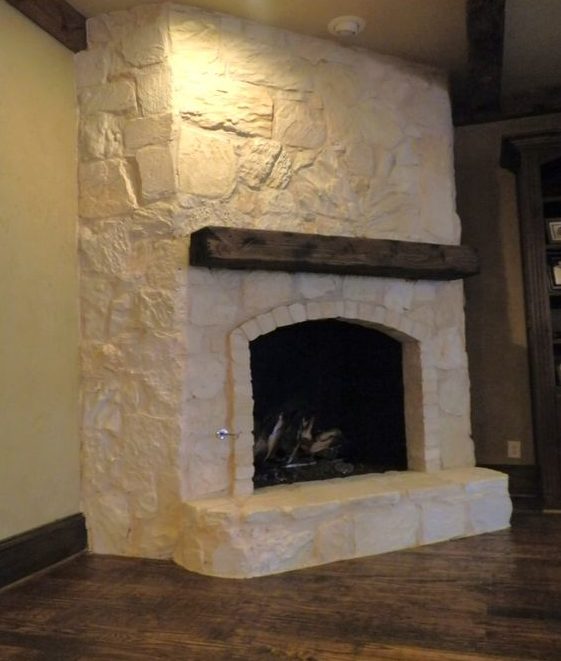 A typical traditional stone fireplace with a wood mantle. The surround is pure stone, and the hearth is in the conventional arched shape that the very oldest of the fireplaces could boast. The even layering on the façade adds a modern touch to the whole scenario, and makes this stone fireplace fit for a modern home.

4. Best of Both Worlds

This stone fireplace tried to take a dose of the modern with all of its convention. The dark texture of the stone is a stark contrast against the smooth white of the walls, and the trendy knick knacks that have been hung over, or put on the mantle. The two elements juxtapose to create a rustic-contemporary effect that is truly welcoming. 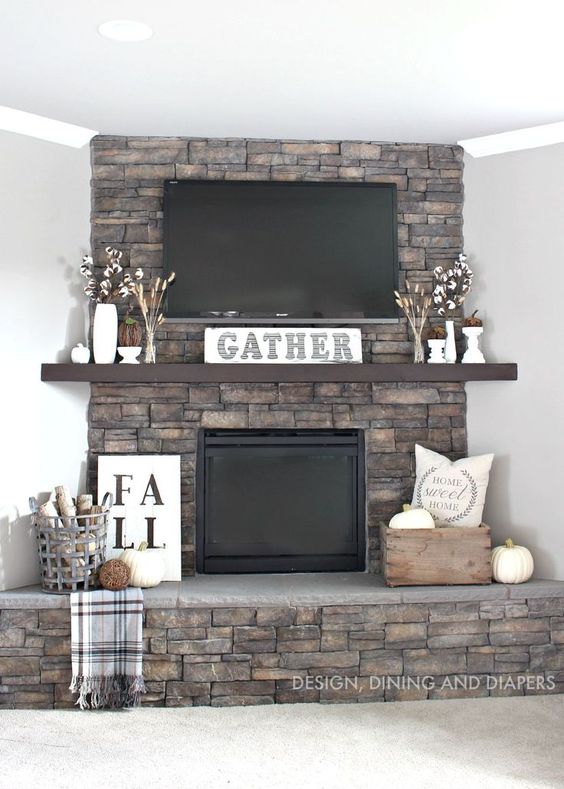 If you want to experience the true cottage style of interior design, then this fireplace would most definitely be the perfect option for you. The uneven sizing of the stone, combined with the complicated layering only adds that truly vintage effect that perfectly amalgamates with the cave like build of this stone fireplace – like you’re sitting inside a house made entirely of perfectly aligned rocks.

This outdoor stone fireplace is a bow to the traditional – built entirely from stones, the mismatched texture on each rock seems purely coincidental, but is definitely meticulous. The short stature and boxy physique of the fireplace are a nice foreground to the verdant green of the foliage behind. 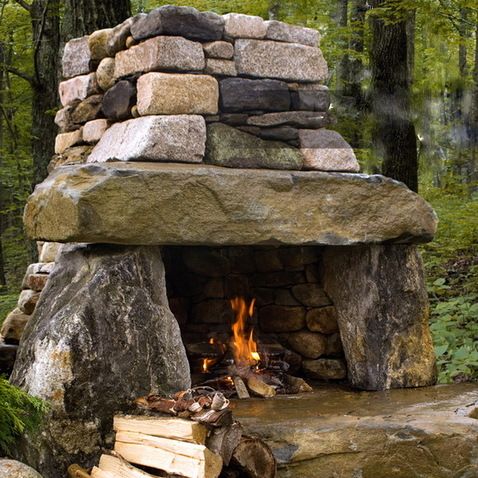 This stone fireplace tries to emulate the modern style of interior design while trying to maintain the integrity of the stone – the result is quite a hybrid mixture of modern and vintage – in which modern entirely prevails. The white rendering of the stone texture, and delicate evening of the façade are the unique characteristics of this stone fireplace. 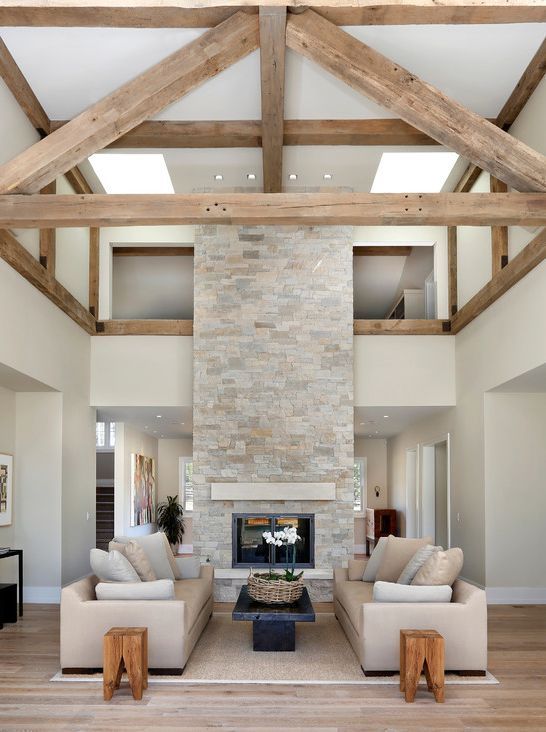 Another contemporary amalgamation of vintage rustic and modern, but here, rustic dominates while retaining an element of modern. The warm colors of the stone, combined with the rough texture definitely lend an element of authenticity to the entire mix, and the baubles set on the mantle reinforce that idea. 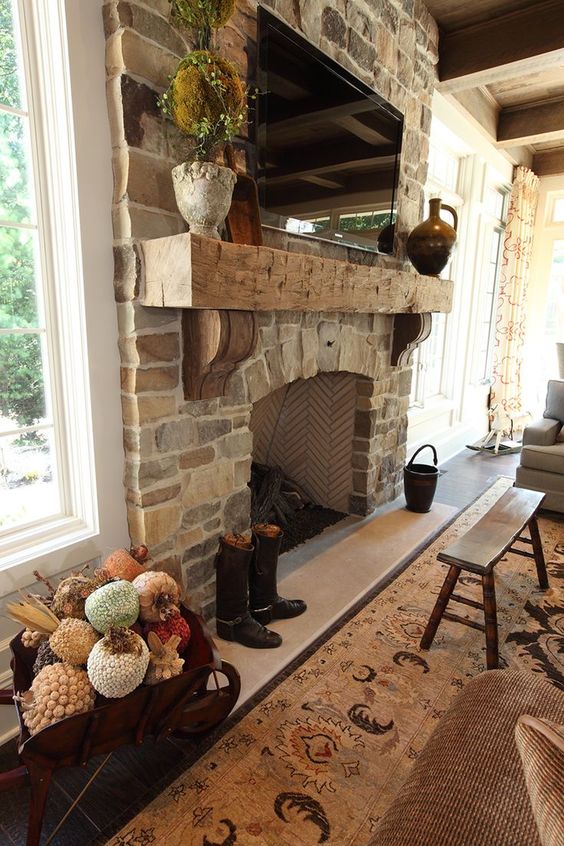 This fireplace is something you would expect to find in the Gryffindor common room in Hogwarts. Exuding all sorts of warm and cozy, the stone in this fireplace is small and immaculate, and the varying degrees of color in each one is what lends authenticity to its rustic formation. 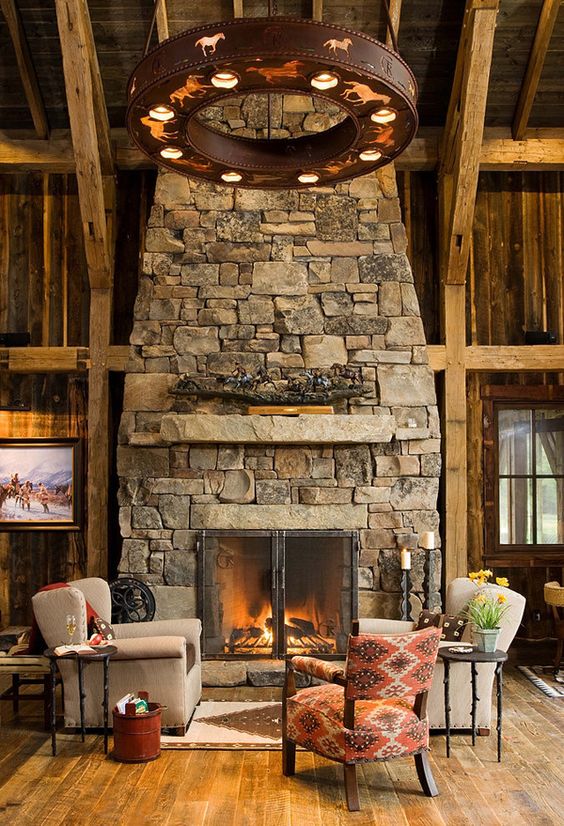 This fireplace is definitely fixed on a planned platform, which shows in its physique. Otherwise, it is a typical blend of modern and rustic, which retains its basic appeal through the use of authentic stone facading. 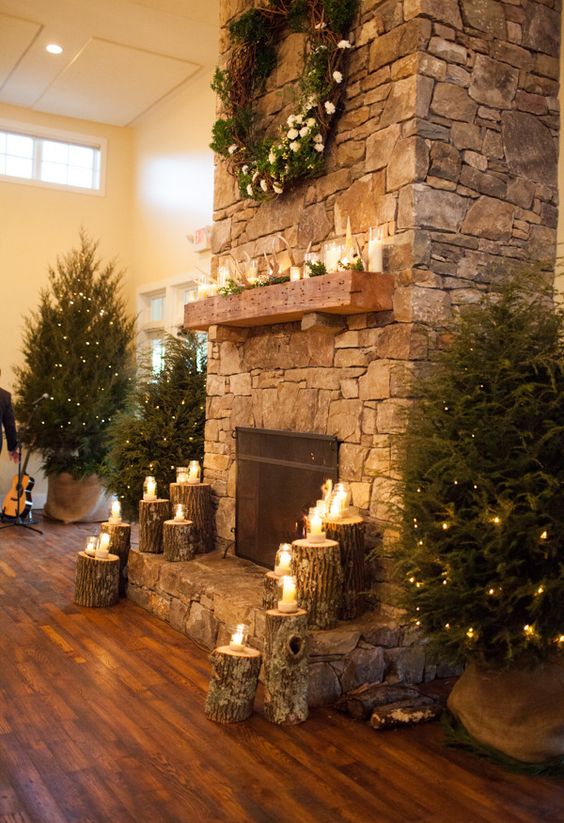 The layering and picture portrayal in this stone fireplace are unparalleled – mostly because of the size of this specific stone, and how it is flat on two sides. The decorative stone embroidery on the mantle is intricate, and meticulously done – a perfect weave. 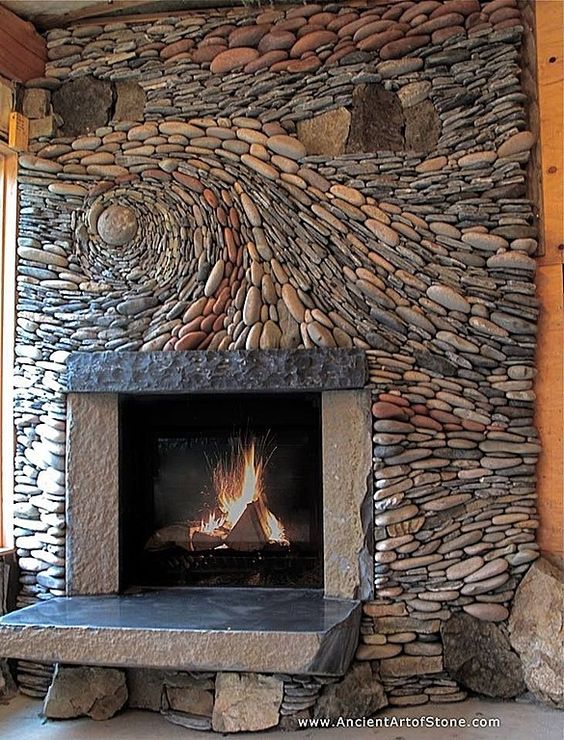 This one tries to emulate a different aesthetic by combining a lighter shade of wood into the mix – it takes away a bit of the authenticity from the pure vintage of the environ, and adds a bit of modern to the mix. 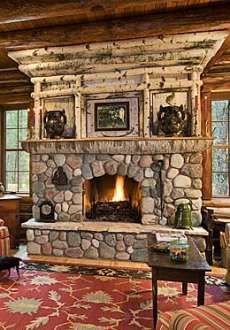 This outdoor stone fireplace embraces the magical beauty of its surroundings by playing on the nature as an intricate part of its design. The creeping vines, and sprawling bushes lend a truly magical aura to the surroundings, while the fireplace stands solitary in between.

A modern take on the rustic features of the fireplace, the surroundings takes away from the texture of the stone, and the white paint makes the room seem modern, but not austere. 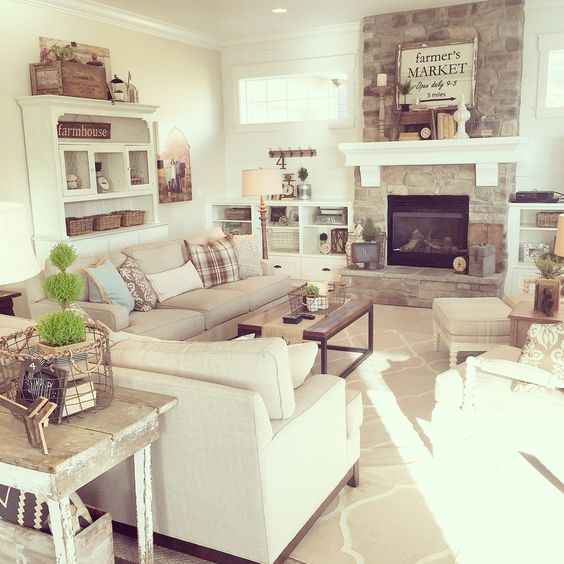 15. Cottage in the Woods

Emulating a cabin in the woods feel, this stone fireplace only reinforces that idea by building, and showing off a storage compartment that showcases a collection of decorative firewood. 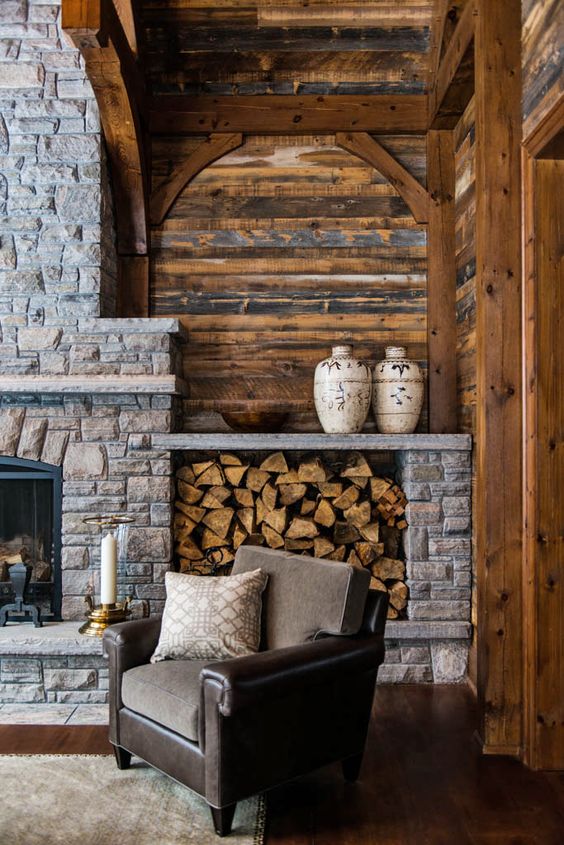